Top Posts
How to add transition effects between stories on Instagram
Best free illustrations for commercial use on websites and apps
But Make It Fashion: 4 Good Photo Editing Apps for Fashion Bloggers
Panoramic Perfection: 3 Apps That Will Give You the Best 3D Picture...
The Best Apps for Tweaking and Fine-Tuning Selfies
5 Apps That Will Help You Create Awesome and Free Cinemagraphs
Top 5 Photography Apps for Digital Nomads
How to Add Music to a Picture or a Video: These 5...
Cool Overlays, Man! The Apps You Need for Adding Text to Your...
Insta Delicious: 4 Best Apps for Taking Food Pictures
Home Design How to add live glitter effects to Instagram videos

How to add live glitter effects to Instagram videos

You may have noticed a viral trend amongst Instagrammers with the addition of shimmering glitter effects that provide a realistic sparkles on light sources in videos.

Instagram influencers have made a new viral trend: The glitterization of video. During fashion week in NY and London the app KiraKira+ was heavily promoted, making it a household name practically overnight and causing a viral sensation in the social media world.

It’s particularly common in Instagram circles where people are showing off their fresh manicures, in fact you’ll be hard pressed to find a manicure video on Instagram that doesn’t use this effect!

I think this might be my first ever video #evachenpose (and first one with a Kira Kira filter, certainly). No bag today but the boots are so extra I felt like they were sufficient. Also if you look closely at my right knee, you can see a CC pressed into my skin from sitting with my legs crossed at shows all day

Surprisingly there are only a couple of apps that pull this effect off well. They work like this:

It really only works on parts of objects that are already shiny, and it is no good for humans or selfie shots. Half of the fun is experimenting and seeing what the app decides to make glitter!

The technology behind this is actually quite impressive, which is probably the reason why so few people have managed to create apps that work well with this effect. Nobody has yet made this effect work well on Android devices, but we’ve got our ear to the ground and will let you know as soon as Android has a decent release.

Subscribe using the form below to receive an email as soon as a release of a KiraKira+ style app is available on Android. 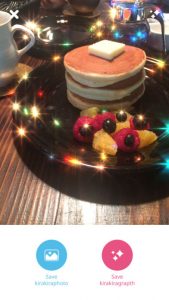 Available for $0.99 on iPhone/iPad

KiraKira+ is the original and best app for adding the sparkle / glitter effect to your videos. The app was recently updated with more filters, plus the ability to load videos from your album (which people were crying out for!)

There still aren’t any apps that compete with KiraKira+ for this effect, it’s hard to recommend anything else!

Unfortunately no apps exist for Android that we currently recommend to replicate this effect. Sign up to the following mailing list to receive a notification as soon as a KiraKira+ style app is launched on Android and this post is updated, so you can be one of the first to find out!

Best apps for Portrait Mode on any iPhone, iPad or Android