It’s easier than ever to add text behind objects in a photo, using these specialized apps. This cool effect is both impressive and easy to achieve.

When adding text to a photo, you can take the boring route and just put text on the top. Or you can try this effect: add text behind objects within your photo. The resulting effect makes text appear as though it is part of the image rather than just overlaid onto the image.

100% Free for iOS and Android. Available on the App Store for iPhone and iPad. Download from Google Play for Android.

You can manually erase text to make it appear behind an object in a photo using Snapseed. Snapseed is loaded with tools and isn’t specifically for adding text behind photos, but it definitely does a great job. The only catch with this app is that you will need to follow this video tutorial.

This app is available for the ridiculous price of free.

iOS only: Free from the App Store for iPhone and iPad, in-app purchases

This app allows you to add your text to the image and then erase parts of the text that you want to appear behind objects within the scene. Under Ink also comes with some nice features, including 3D rotation of text, which helps you to refine the effect. The Undo Erase feature is essential but requires an in-app purchase. If you make a mistake without this tool, you’re out of luck and need to start over. 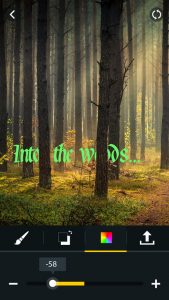 Write Behind Text On Photos

iOS only: Free from the App Store for iPhone and iPad, unlock everything for $9.99 (in-app purchase)

Another app that works by letting you text to the scene and then erase parts you want to mask. To remove the watermark is quite expensive ($7.99). If you can afford the $9.99 to unlock everything, there are some extra nice features including gradients and gold foil textures.

Related tutorial: How to add text to an image